“Our path to Unity Consciousness is directly linked to the energies that constitute archetypal vision. It is also linked to what many experience as the Christmas Spirit which encompasses a free and joyful sense of giving and sharing. I know that for many people this sentiment sounds outmoded, but nonetheless, it is a very accurate statement for the sheer fact that we would never be able to ascend into a higher community of cooperation without this impulse.” 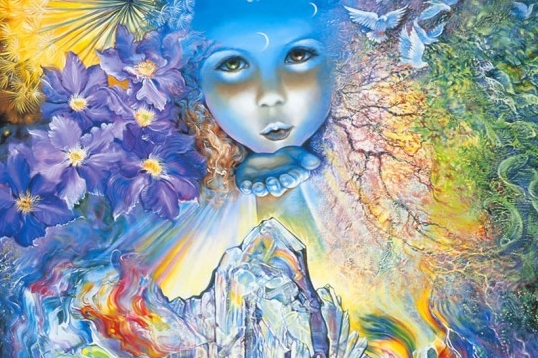 Since I began writing Beyond the Soul’s Meridian it has become apparent to me that I am not the only one thinking these thoughts.  The work remains unfinished as there is always more to add and perhaps even to take away.  The impulse to write it began as a notion that progressed throughout the 2012 year that in the end dropped directly upon the back of my shoulders like a Buick Century sliding off a lift and pinning me against a cement floor.  I found myself at that time barely able to breath.  There were no other options for me other than to write.  As I began this endeavor, I purposefully isolated myself from all other wisdom sources outside of what was needed to validate my own visions.  It was only around the end of last year (three years to the date that I began writing) when I finally started to look closely at what others were expressing about the transition that we are now living through.  In general, I find all of it quite validating as it seems to be echoing and enhancing my own thoughts and insights.  Perhaps even more astonishing is that I discovered so many other souls channeling this transformational impulse beginning around the year 2012 through their own wisdom endeavors.

I had always envisioned my work as a personal version of a Jungian Liber Novus (Red Book) which in many ways may be unsuited for anyone else to read and only fit to become committed to a vault.  Perhaps this is true, but at least the thoughts have been articulated and are now part of our collective consciousness.  So it may contribute to a greater insight into our spiritual heritage and an understanding of archetypal wisdom for anyone in the present or future that cares to know about these things or even cares to be known by others who have come to understand these mysteries.

Our path to Unity Consciousness is directly linked to the energies that constitute archetypal vision.  It is also linked to what many experience as the Christmas Spirit which encompasses a free and joyful sense of giving and sharing.  I know that for many people this sentiment sounds outmoded, but nonetheless, it is a very accurate statement for the sheer fact that we would never be able to ascend into a higher community of cooperation without this impulse.

Over the years I have experienced a number of Christmas visions.  Perhaps the most appropriate one for this discussion happened to me many years ago.  In the vision I was back in a familiar hospital wearing my worn out white coat.  I found myself working as a supervising physician so there was clearly a mandate for me to be in that place.  I was standing in a delivery room at the side of a neonatal warming table where a colleague was attempting to resuscitate a dead infant.  When he noticed me he looked up from his task and emphatically stated that the infant was dead.  He then demonstrated that there was no movement, tone, breath, or pulse stating, “You see, it’s dead!  The infant is dead!”  He then turned his back towards me and stormed out of the room leaving me alone with this seemingly dead baby.  Yet deep down within my soul something was suggesting that the infant may not be as dead as my colleague had just demonstrated.  As soon as I intuited this I thought I saw its face move which encouraged me to step closer to the baby and begin to exam it.

As I approached the table I reached underneath the newborn, cradling it with my hands and forearms.  I noticed its lifeless weight but because I saw it move, I knew that this child still had the potential for life.  So I began to meditate by reaching deep within the core of my being bringing forth an outpouring of loving and sympathetic energies.  I then began to feel the baby move in response to my actions.  This intermittent movement on the baby’s part inspired me to continue my spiritual resuscitation in earnest.  Within the dream my attentions were focusing the energies of my heart into this child.  I then sensed a tremendous amount of warmth return to the baby’s body and at the same time the presence of tone and movement.  As I felt its breath and pulse return I shifted my awareness to behold a magnificent golden aura bathing the child and I realized that not only was this baby pure love, but that I was holding the archetype of the Christ Child.

Drawing the baby up to my chest I was astonished by its love and magnificence.  In reality it was not much different from the moment I experience when I first held my daughter and son (or any other baby), but this was magnified by the fact that I was experiencing it with a greater level of spiritual clarity and understanding.

After considering the magnificence of this child for a few moments in a blissful state of peace and oneness, I realized that the parents were callously told that the child was dead.  I could actually feel the sense of grief that the mother was experiencing which made me very unsettled.  Immediately, I inquired as to where the mother had gone but I was told that she left the hospital and no one could provide her address.  Yet I was confident that I could find her because something within my soul was telling me where she may have gone off to.

But first I had to take care of this child.  Although there was a part me that would have gladly accepted this child as my own, there was an overwhelming impulse within me to re-unite this child back with his mother as soon as possible.  I felt that if I could successfully accomplish this task that it would be the greatest thing that I could achieve within my lifetime.  At the time I had absolutely no doubt that I would successfully complete this task.  So I lovingly swaddled the child and then literally wrapped him in a gift box.  With great intention and haste, I left the hospital to safely return the baby back to his grieving mother.

What I thought was a simple task turned out to be quite a different story as I have spent many years now in search of this child’s parents.  The baby represents many truths but one that always seems to fit is that it symbolizes the state of our healing vocation, which from a spiritual perspective is nearly dead. It must be revived through a greater understanding in Christ consciousness yet this can only happen if we can accept the Christ Child in a way that only a loving parent could receive him. So far, I have encountered very few within my vocation who are even interested, let alone, prepared for this task.

Hopefully the time will soon be upon us where there will be many more ready and committed to fulfill this critical task of receiving and nurturing this essential impulse.

All of us have a great gift to share.  We must continue to build upon the impulse of compassion and unity while learning the art of freely sharing and receiving this grace.  If we are finally ready to get off of our world’s ego driven merry-go-round of illness, strife, separation, competition, and conflict then we really must choose to journey into a more balanced culture of health, unity, peace, and cooperation guided by our soul’s highest principle, which is the essence of infinite love that this child represents.

This is a text widget. The Text Widget allows you to add text or HTML to your sidebar. You can use a text widget to display text, links, images, HTML, or a combination of these. Edit them in the Widget section of the Customizer.